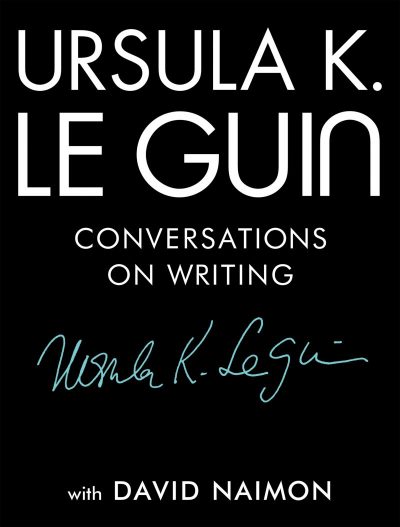 Ursula K. Le Guin: Conversations on Writing (Tin House, 2018) includes three pivotal interviews of Ursula K. Le Guin conducted by Between the Covers host David Naimon. Each interview only broadly segregates fiction, nonfiction, and poetry from one another, examining genre through the lens of both Le Guin’s own writing, as well as through the history and craft of each genre. Reading Conversations on Writing is like finding yourself sitting next to two lovely, insightful people in a coffee shop. You can’t help but shamelessly eavesdrop, their dialogue as inspiring as it is, their voices so clear with passion for the discussion at hand.

As followers of Naimon’s literary podcast already know, his interviews are wonderfully conversational, offering questions that create a layered discussion in which both he and the author seem to be traveling somewhere together. Conversations on Writing is no exception. The book is a pleasure to read, in part because the sense of ease between Naimon and Le Guin is palpable, making the reader feel amongst friends.

In Naimon’s meditative opening for the section titled On Poetry, he contemplates the capacity of Le Guin’s poems to create fellowship with nature and otherness: “As we continue to look up at a sky that has been ‘humanized’… the opportunities to create fellowship seem to diminish. It’s the attentiveness of poetry, of Ursula’s poetry in particular, that enacts ways to still do so.” Le Guin and Naimon’s discussion on animals and otherness is only one aspect of the book that inspires a renewed and nuanced appreciation of the importance of animals populating literature and inhabiting the world. Le Guin delves into her view of subjectification as well, as a way of identifying with nature: “Many scientists want to objectify our relationship with animals and so we cannot say that the little ape is acting just the way a little human would… we can’t, we’re not to, have fellow feeling with an ape or a mouse. But where’s poetry without fellow feeling?”

Throughout Conversations on Writing, the overwhelming sensibility from Le Guin is that of her openness. Within each interview, Le Guin often asserts her artistic beliefs while resisting traditional doctrines of genre and story, including the ideas that “story is conflict” and talking animals are only for children’s books. She also shines a light on the ways women writers have been erased from the literary canon over the years, while their male counterparts are still regarded as beacons of the craft. Naimon and Le Guin discuss authors such as Grace Paley, Cj Cherryh, and Mary Foote as examples, asserting Foote had her life’s story taken and turned into a novel by Wallace Stegner. Additionally, Le Guin questions, as she has for years, the common belief that speculative writing is somehow independent and separate from great writing, concluding that “…I think the exclusion of genre writing from literature is in the past now. It’s hard for me to stop talking in those terms, though, because I had to keep arguing for so long that genre is literature just as much as The Grapes of Wrath is. Of course most of it isn’t as good–but most realism isn’t as good as The Grapes of Wrath either. Judgement by genre is just wrong–stupid, wasteful. Most people know that now.”

In the section titled On Nonfiction, Naimon asks Le Guin about her opinion pieces and how she knows when an opinion piece is finished. Le Guin offers, despite haunting, underlying uncertainty, sometimes a writer just has to stop when it feels like enough: “You really have to try to leave the door open at the end of the piece.”

The rewards of reading Conversations on Writing expand as the pages turn. Each interview is an invitation to delve into the complex, mysterious facets of writing and philosophy while spending more time within Le Guin’s enduring insight and compassion.