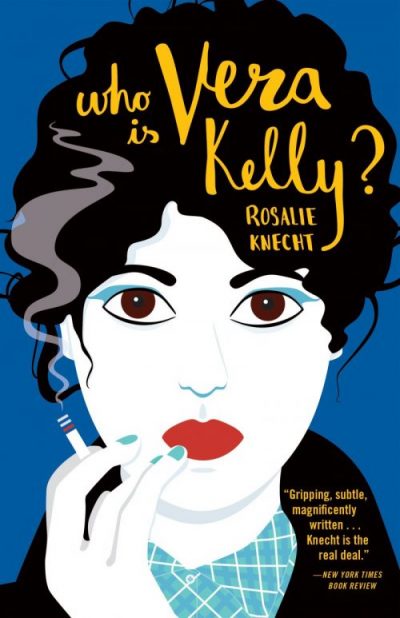 Rosalie Knecht’s newest novel Who Is Vera Kelly? (Tin House Books, 2018) aims to answer the difficult question posed in its title. In large part, it’s a coming-of-age story about a girl growing up in the sixties. But unlike the classic bildungsroman, this noveldefies the reader’s expectations and blurs the lines of genre. It is at once a period piece set partially in South America during the historical Argentine Revolution in which General Ongania overthrew President Illia, as well as a spy thriller and a queered bildungsroman. The novel tracks the title character and heroine from 1957 to 1967, from suburban Marylandto a Buenos Aires on the edge of a coup, with a stop in the underground gay scene of Greenwich Village along the way.

Once the coup takes hold of Argentina, Vera finds herself stranded and alone in an increasingly militarized country with a fake passport, no way to get home, and no place to hide. In order to survive, Vera must turn to the people the CIA hired her to infiltrate, but will they find out her true identity? And what will happen to her if they do? Who is Vera Kelly? is an enthralling novel that will keep you up all night. Some spy thrillers feature a machine-like protagonist who solves crimes and unravels mysteries like a computer running an algorithm. With this novel you’ll feel as if you’re sitting right next to Vera, a real woman who will keep you grounded while you roll with the twisting, turning, fantastically suspenseful plot of the narrative.

Told in chapters that alternate the past and the present, the novel depicts the steady progression of Vera’s life. Through the shifting of time, the reader learns how the past influences Vera’s present. In the past, Vera is a high school student with not-so-typical high school problems. She has an abusive and controlling mother and she is in love with her best friend, Joanne. But after Vera gets arrested and sent to a girls’ home, she is recruited by the CIA and sent to South America, taking the memories of her formative years with her.

The chapters set in the present take place when Vera is twenty-five and stationed in Buenos Aires on her first lone mission for the CIA. But Vera becomes true friends with the students she has been tasked with monitoring. Romàn and Victoria are a smart, charming, and intelligent couple that Vera genuinely likes, though the situation complicates after Victoria, a modern femme fatale, corners Vera at a party and kisses her. In order to free herself of the tangle of lies and secrets she has wrapped herself up in, Vera must confront the truth of her identity. In doing so, she becomes a modern heroine readers will love to cheer on.

Rosalie Knecht is a social worker in New York City and was born and raised in Pennsylvania. She is the translator of César Aira’s The Seamstress and the Wind and has been a Center for Fiction Emerging Writer Fellow and a Fulbright English Teaching Assistant in Argentina. Her debut novel, Relief Map, was published by Tin House Books in 2016.

Jessica Fonvergne is Portland Review‘s current Fiction Editor and one of the journal’s incoming Editors-in-Chief.