The first time I saw Laura Patterson’s guts was 6 years ago. We had just met, sophomore year of high school, when she sat down next to me in the library. We chatted for a few minutes. She was a new sophomore, quite eager to talk to me. I assumed she was like this with everyone, looking for new friends. But I was too, so I tried to reciprocate her enthusiasm. She invited herself to my house, and that Saturday I was shockingly unannoyed by her chattiness with my parents and my little brother. I made a game of counting the words between each breath she took. My mother asked her to stay for dinner, and she did.

Afterwards, in my bedroom, while she waited for her dad to pick her up, she told me about her mother’s recent death, the big move, the summer jobs, the first kisses, her whole life spilled into the space between us. I wondered if she did this with other people, the oversharing. I listened tentatively. And then I watched, horrified, as I saw her open up, organs falling to the ground. First kidney, then the next. Each toppled out of her body casually and indifferently, as if not meant to evoke reaction. She asked me, uninterested in her own falling organs, if she could stay the night.

“Of course,” I said, petrified. We slept in my full-size bed; her left leg stretched around my hips. I lay still all night, in and out of sleep, worried a movement might cause her to pull away. I woke up at 7, neck hurting, and she woke up at 10, offensively well-rested.

The next week, Laura Patterson was at my house again, eyes lifeless and hands swelled to twice their size. I avoided touching them, fearing that a wrong move would make her pop. But she seemed to have no interest in avoiding or preventing the gore. During a story about her mother, her small intestine plopped onto my bedroom carpet. I picked it up and looked at it, gathered the two kidneys, and started sewing them all back in, carefully weaving the needle as she smiled at me.

Two years passed. I was in a bathroom with Laura, anxiously staring at my body in the mirror, frantically adjusting my dress, holding back public-school tears. I was overwhelmed, ashamed by my own overwhelmedness, and ashamed of the fact that this overwhelm stemmed from absolutely nothing. “I’m fine,” I told Laura, picking at my freshly-manicured cuticles, hoping this would be enough to halt her concern.

“This is stupid.” I was crying now, “this is just so stupid.”

She took my hand and walked me to a small dressing room behind the school’s theater. She hopped up on a vanity and patted next to her. I sat, and she played with my hair as I cried into her chest.

“I hate that I’m doing this to you,” I admitted.

“I’m all insecure, and it’s my own fault, and I’m tearing you away from all your other friends.” I looked down and watched as my stomach lining poured onto the cold tile floors. It gushed out of me, hot and fast, uncomfortable but painless. I went on. “You’re in a gross dressing room with me because I can’t socialize for one night. One night. You don’t need to be here with me.”

Laura stared at me for a few seconds. She opened the janitor’s closet door, pulled out some cleaning supplies, and began to mop up my stomach lining. I wept as she filled me back up and cleaned the floor.

On the seventh anniversary of her mother’s death, a week after we graduated college, Laura and I drove to her dad’s house to gather some things for our new apartment. As she drove, she tapped the steering wheel, fingertip by fingertip. Laura began to explain her father, as if I’d never met him before, like I was some sort of guest in her life. “He’s been a bit much recently. Like, like, he’s just not really with it anymore. But he’s a good guy. Such a good guy. He just doesn’t really get who I am. . .”

I nodded, letting her rant wash over me like I hadn’t heard it all before. At some point though, I realized Laura had stopped talking. The car felt tense. It was like she was having an argument in her own head, working herself up in a way that made me concerned about her driving. I said nothing as the earwax spilled from her ears and crawled down her neck.

That day, when her father recalled his wife’s laugh, his liver fell to the floor, and Laura gripped my hand, flinching as she walked with me. Magazines and dishware and books were

cluttered up on each table and chair, everything coated in blood and muscle. She gripped her nose while we cleaned the worst of it, and grabbed the books and pictures we were there to collect. I drove home. Laura slept sprawled out in the back seat, mouth wide open and drooling a bit. Somehow, she looked cool.

Laura was dancing alone in our living room. I watched her for a while. In her dancing, I saw everything I loved in her. The eccentric assertiveness, the love for the world, the way she moved her body without giving a fuck.

I tapped her on the shoulder. She turned and smiled at me, taking my hand and leading my body along. I put my hands on her face and admired her dimples, and then I kissed her. If she’d asked I would’ve told her that it was a platonic expression of love, but as she stared at me afterwards, jaw open and eyebrows pinched, suddenly, and with no warning at all, my chest opened up, my insides twisted, and my heart, still beating, fell to the floor. 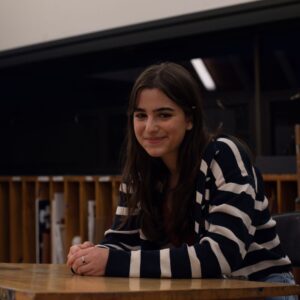 Lena (she/her) is a high school senior from upstate New York. She loves to write anything but college application essays.