The jar looks to be full of swamp water. Its contents swirl and leave grit on the glass when you turn it over in your hands. “Duck blood soup,” explains your mother. “Czernina.” It always makes her sound even more Michigan, you think. She says it like chy-NEE-nah, which looks like “China” plus one syllable in your head, and sounds like CHAI tea, a woman named NINA known for her CHAI. You’re prone to these wanderings, even with the medication.

Your mother always tells you that her grandparents were immigrants. All from Poland, full-blooded Poles, the genuine article. Her parents argued in Polish and made sure the kids never learned it. One day, a DNA test reveals that you are nearly 70% Scandinavian. Only 30% Polish. Your father blames his mother. “She was always a mutt,” he says.

You remember how sharks fight in the womb, sometimes killing siblings in order to be born. It seems some part of you has eaten the other, while you sat. You feel an emptiness, a new awareness of what was always there. Questions, never answers.

Sometimes you browse Holocaust registries for your mother’s maiden name. You marvel at the pages of Pawlaks, even though you know your great-grandparents left before even the first World War. This habit, you think, is voyeuristic. But the word “voyeur” comes from the French voir, to see. When did the voyeur earn its reputation for peeping? Perhaps all you want is to see something, yourself reflected back. And yet, there are only strangers, names that you do not recognize. You see nothing.

The geographical regions given by your DNA test overlap in northern Poland. Google tells you that this land on the lip of the Baltic Sea was once called Pomerania, and to this day, its people eat a soup made of blood. Kashubians, a blog post adds, are known for having blonde hair and blue eyes, which can be traced back to the Swedes who lived on the other side of the Baltic Sea. Through war and conflict, the Swedes invaded and stole women. Genes added to the pool. A soup made of blood.

Your uncle is the only one who still has the recipe and the guts to make it. Periodically, your mother comes home with a jar of it, fresh from Uncle’s kitchen. “Dad’s recipe,” she says. Like always, she tells you it’s not for everyone, and you stop yourself from saying I know. The house fills with a metal smell when she microwaves a bowl, and you remember the taste. Like licking a papercut.

Google is the only one to give you a recipe. Uncle has it committed to memory, and what good would it do now – you don’t eat meat. You don’t know how the online recipe measures up to Grampa’s, but you don’t recall diced carrots, and this recipe doesn’t even say how to bleed the duck. Another has instructions for thawing duck blood. It seems everyone buys it now. You wonder where your uncle gets it.

When Grampa died, you hadn’t been born, or even conceived; he missed you by more than a decade. Lung cancer. He’d quit smoking early, but not early enough – your mother remembers the car packed with smoke, bouncing along the road, stopping to vomit. For the rest of his life, she tells you, he kept a pack rolled in his sleeve. She can’t decide whether it reminded him of his willpower or what he’d given up. He’d given up a lot of things over the years: teeth, one wife, a home.

Through the 19th century, Google tells you, czernina was served as a part of a Polish marriage proposal. You imagine someone wheeling out a cart bearing one covered bowl, for the mister, like the final decision in Chopped. When the cover was lifted, duck blood soup meant no, she would not have him. A woman online says “this soup must have broken a lot of hearts!”

How To Cook Polish Duck Blood Soup: Part I – Prepare the Duck Stock

In water, bring duck meat and stomachs to an almost-boil. Avoid a full boil, for the sake of flavor. While the mixture almost-boils, a white foam may form at the top, which you will discard. The foam is called szumy. You wonder how often your grandfather thought about szumy, whether the way it bubbled might have made it look like someone he missed. Things risen to the top and skimmed off, away, gone. 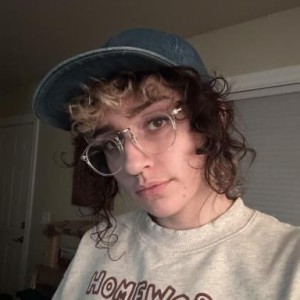 Kellie Rankey is a genderfluid writer from Saginaw, Michigan. Their work has appeared in The Normal School, Tiny Molecules, Wrongdoing Magazine, and the Michigan Sociological Review, and was longlisted for the American Short(er) Fiction Prize. Outside of the realm of writing, they dabble in wildlife rescue, passively study quantum physics, and frequent estate sales.