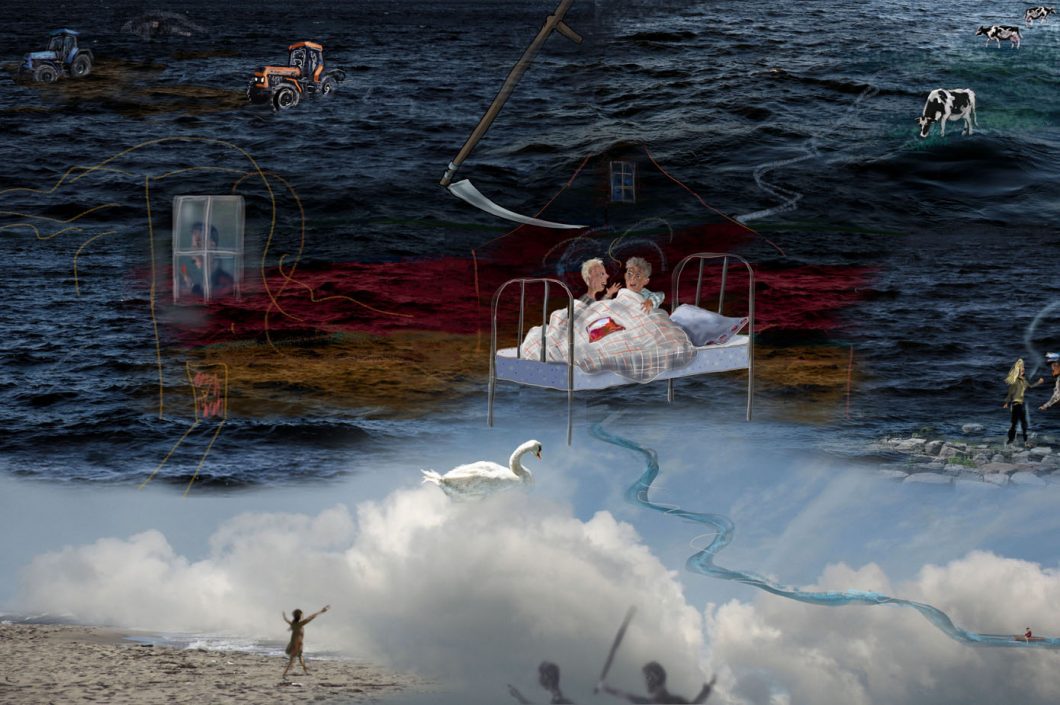 In English as well as Polish, the word for the chart of symbols containing information about how to read the map is called a legend. There is more here than just two-dimensional spatial orientation. There are also stories, interpretations, memories. Thus, each little circle representing this little town or that giant city is more than just a fact, but the center of a complex web of connections for the individual who has lived in that place, who has visited that place. And, in every map, there are the blank spaces. Not everything can be represented, not every town, not every house, not every tree—let alone the flying birds and hopping frogs, the women hanging laundry or the men casting nets.

Indeed, one of Jorge Luis Borges’ short stories involves the creation of a map so accurately detailed that it is the same size as the world that it maps. The map is perfect, but also perfectly unusable. Perhaps what Borges wishes us to ponder is that there always must be a gap between what we see and what we can express, between the word and the world. Certainly not just around but also inside the various “maps” of either image and language in this exhibit, there will continue to exist white spaces that other people will be able to fill in, through their own imagination and life histories.

In the early years of cartography, the white spaces would even have a name—terra incognita. Today these blank spaces still remain, though not so much on the edge of our maps, but within their borders as we try to draw in more and more details between the details already present, not to mention the details that are now blurring, caught up in the process of being erased through death, upheaval, accident. Meanwhile, the Map abides, though with continual changes: the story of humanity and the land eternally drawn and erased, raised and lowered, channeled by giant levees and destroyed by giant floods.

Of course, in my poetic mapping of the Wyspa Sobieszewska, I know that I am an outsider. I recognize the irony of a newcomer providing images of this place to those who already live here. My perspective will be different than those of the residents of the island. But while I have been here, I have tried not just to see but to dig, to try to grasp this place not just as it is now but as it has been, to envision the island even before it was an island—created by both ice and Prussian engineer—and to hear the many languages spoken here. In the end, what I have to offer is just another map, though a map where one place is connected to another by image rather than road, where the boundaries are as fluid as the stories.

All my life the levees
have been caving in, the Vistula

pouring into my bed, my mother angry at its tracks
she said I made on the floor, the slow meander

to the bathroom and back. In the last century
the man would use a scythe. If he cut his thumb

he sucked it. When the woman burned her bread
she burned it in German. I know this because

I watched them out my window
as they moved through the yard.

(Each night their little boy
joined me in my bed. He spoke his language.

I spoke mine. When we cuddled
we said nothing, our toes

trying to find a shore of warmth.)
The slow flow of cows

lapping at the seawort,
The land puffs like a bedspread

folding upwards at the end.
The tractors

sailing back and forth.
(And then my friend whispers

how one day the Baltic
will rise higher than the sky.

Our bed washing out
into blackness.)

Świbno, Just Before the Mouth of the Vistula River

Which is worth more:
the memory or the words of the memory?

no one will ever read. The names
of sparrow, pigeon and magpie*

frozen in the stones, though the birds
still hop in the branches of the cedars,

celebrate the bugs between the weeds.
The sound of the cars on the nearby street

as they create their own rivers and floods,
their stories written with exhaust.

Eryka Kroll lies here since this Spring
too soon to have a stone, too soon

the words for her fingers
were not the same as for her toes.

to live on the island. Think
of how her word for death bed

for duck and cloth and river

all were tied up in a sack,
thrown like kittens in the Weischel.

How her precious island of Bohnsak
disappeared into a hole.

*In Polish, Wróblewski (connected with sparrow), Gołębiewski (with pigeon), and Sroka (with magpie), are all common family names. Weischel is Vistula in German, whereas Bohnsak was the German name for Sobieszewo.

the earth is black enough already, the work

the grease and mud and smashed fingers

the sound of metal on metal of bone on bone

your teeth jouncing as the harrow scrapes its own rusty path

—and then you hit a bomb. once

and then the blood that slid off him.

we never found his arm.

in those days the unexploded shells
lay like hard potatoes in the ground.

you only find more blackness

floods waging their own wars

now you get fined for what was once your duty.

wrinkles deep
as the ditches in a field

first came the Germans
then the Communists

now people who want to save the birds

each story that you tell
makes an even larger hole

the earth is black enough already

but old men have their uses. I keep my knife sharp

and my tongue even sharper.

but these aren’t just weeds

I cut on the roadside.

one branch added to another

we have to sweep the snow

or it will cover us.

the weight of all those drifts.

the weight of all that sky.

We all become amber. Our faces revealed
in sand.

depressed on the levee wall.

The smeared map of rivers, erasure

opened up our well
and shouted to the bottom.

The echo that came back
was the voice of someone else,

one more mouth of the Vistula

opening like a wound
in the middle of the island.

The Island of Lost Dogs

Bowing, the boxer is shy, front paws splayed
as Ania puts out her own trembling hand
allowing him to sniff her fingers
to show that she too is fragile, easily
bitten or betrayed. That is what they do, those owners

she says, petting the brown mesa of his skull
as the bus arrives, its own sleek body
throbbing like a pent-up canine. November, Sobieszewo Island,
we are to walk the stone causeway the Prussians built,
look for tiny shards of amber. But Ania is clutching

the quiver of this dog, vowing she must take it home.

Leave the mutt alone I think. It’s fat enough to have an owner.
We cannot take a dog on the bus I think. O Ania O Ania.

balm of summer
healing all wounds? No wonder

that this man or this woman
from Wrzeszcz, Sopot or Gdynia

to the overwhelming winter
of their homes.

All dogs go to heaven.
Even the ones who are too much trouble

I want to learn the name of every bird I see.
I want to see each seal that returns to the Baltic.
I want to save the environment and drink a lot of auburn beer.

I tell Ania that we can’t take the boxer on our hike.
He’ll scare off all the birds and we don’t even have a leash.
If he is there when we return then we can talk some more.

We all are walking blindly in the middle of a story.
Do you think that as the bus headed off from Sobieszewo to Gdansk,
spewing exhaust and kicked up dust

that the little guy was with us, licking hands and shivering with delight
or was it walking from one street to another,

Even When There Is Only Ashes (The Fire in the Church, Sobieszewo Island)

“I ask for her favor, and she always brings me such joy, despite her name being the Sad Mother of God.”

—a woman parishoner from Sobieszewo Island, on the Weeping Mother of God statute in the Saletynska Mother-of-God Shrine, the only item saved from the church in the fire of 1960.

Not only war destroys. The fire
in the church, the fire

in the belly of your husband.
Not just the vodka

but the sour pickle of his breath,
the increasing bitterness of tea

when only tears evaporate.

No wonder each woman
carries the woes of the other

through the fire that keeps burning
even when there is only ash.

“When the smoke cleared that night
only the stars were our comfort.

Not even Our Mother’s weeping
could put out the flames.”

But as they dragged her to safety
She also carried them

calling the secret name she used
to soothe them

lost inside the darkness
of their childhood beds.

How do they contribute?

Tolerate
the bad habits of the river

that never get to vote.

Dogs and weeds go there
to hide

until they get their day.

Daniel Bourne’s books include The Household Gods and Where No One Spoke the Language. A translator from Polish, he has lived in Poland off and on for many years, including the fall of 2018. Other poems about Sobieszewo Island, Gdańsk, and Poland in general have recently appeared in Salmagundi, Yale Review, New Letters, Diode and St. Ann’s Review. He teaches English and Environmental Studies at The College of Wooster in Ohio.

Wojciech Kołyszko has been a noted book-illustrator and visual artist in Poland for many years. Twice he has won the Polish Association of Book Publishers Award for the best artbook of the year, among other distinctions. Since 2003, he has lived on the Island of Sobieszewo on the Baltic Coast just to the east of Gdansk.