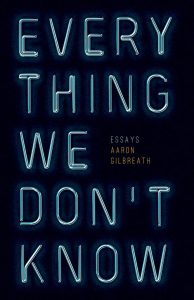 Aaron Gilbreath | Everything We Don’t Know

Aaron Gilbreath’s essays in Everything We Don’t Know are not all about drug use and addiction. Some focus on other obsessions: “Googie” architecture, Southern California beach culture, Star Wars memorabilia, off-trail hiking/road tripping/car camping. Gilbreath’s unrelenting curiosity drives him as a journalist, and it once drove his drug recreation. His recollections of his pharmaceutical adventures are equally entertaining and cautionary.

In his essay “The Stoned Age,” Gilbreath writes, “I was the group’s only ‘marijuana dependent,’ a more ludicrous title to me than ‘chronic masturbator’ or ‘shopaholic.’ Saying it aloud felt as cool as getting high and telling people you were ‘on weed.’” Gilbreath’s older self takes a critical look at our country’s laissez faire attitude toward marijuana epitomized by American movies, asserting the repercussions of marijuana addiction. “If there was a Spicoli biopic which followed his life after high school, it would probably be called Still High in Ridgemont, and it would show him living in his parents’ basement, working the night shift at a suburban convenience store where he chain-smokes Pall Malls and keeps his thinning hair in one of those embarrassing adult ponytails.”

“Land Speculation” similarly juggles the comic with the tragic. Here, Gilbreath introduces his girlfriend to psychedelic mushrooms in the redwoods, where she has an allergic reaction to multiple bee stings. Tripping, he drives her to the nearest hospital and pretends sobriety. “My performance with that nurse was spectacular: articulated words, concise sentences, no bulging eyes. I hadn’t said anything suspicious like, ‘That coat is friggin’ whi-i-ite.’ Or, ‘Dang, love the retro glasses.’” Beyond the humor, at the core of this essay, sits guilt and fear.

In the collection’s final essay, “(Be)Coming Clean,” Gilbreath strips away the jokes and chronicles his battle with a secret heroin addiction in uncanny, precise prose. “The whites of his eyes are taut and mustard-brown, glassy like those of the goldfishes’ at the sushi restaurant you used to eat at before you started spending so much money on drugs.” It’s a sober piece with Gilbreath’s signature insightfulness and candor. 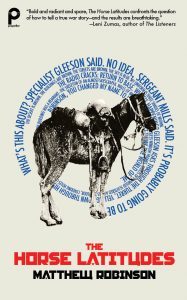 In The Horse Latitudes, Matt Robinson transforms his personal history as a soldier deployed to Iraq in 2004 into fiction. His realistic and individualistic collection of short stories document one infantry squad’s time in Baghdad. Their missions are long stretches of boredom, broken up by flashes of violence. The single sniper shot fired. An IED loosely buried in the roadside, waiting. The enemy is vast and changing.

Robinson’s use of numerous first- and third-person perspectives purposely disorients in a narrative grappling with difficult questions about military service, masculinity, death, and survival. The book’s interchapters consist of a sergeant’s heckling letters to Robinson, challenging the author’s fictionalization of events and the reader’s concept of a story collection. These metafictional interruptions, the multiple perspectives, the exploration of war’s tedium and intensity lend these stories a veracity that traditional, sensationally-told war stories lack. Robinson writes flawed characters and situations in tight, poignant, off-kilter sentences that transport his readers. We feel the heat and weight of the Kevlar helmet, the bulletproof vest, the claustrophobia and fear inside the Humvee.

In the title story, the squad is on combat patrol with other armored vehicles. The sergeant passes time by reading and explaining the “horse latitudes”—two windless spans of the ocean where ships remain still, forcing a starving crew to eat their horses in the hold; it’s a metaphor of desperation that expands as the book unfolds. As the sergeant speaks, Iraqi schoolchildren pummel the line of trucks with rocks. The soldiers’ reaction demonstrates Robinson’s ironic, scopic prose: “One by one, drivers hand gunners bags of candy, candy meant to be handed peaceably to children in the streets of Baghdad to promote goodwill. Now it’s pelting the kids who threw stones at us. Before the stones, though, there was the occupation. Before that, the invasion. There’s always something before.”

In addition to fiction, Matthew Robinson writes creative nonfiction and personal essays. The recipient of a 2016 Oregon Literary Fellowship, his fiction has been published in Propeller Magazine, Shirley Magazine, O-Dark-Thirty, Nailed Magazine, Gobshite Quarterly, Split Lip Magazine, Clackamas Literary Review, and elsewhere. Matthew is co-editor of the online journal The Gravity of the Thing. The Horse Latitudes is his first book. 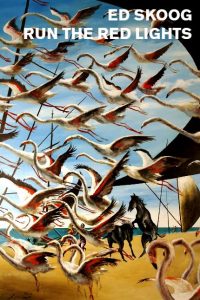 Nominated for the Stafford Hall Award for Poetry, Ed Skoog’s most recent poetry collection Run the Red
Lights stays true to the pleasantly unexpected nature of all his poetry. Testing the bounds of seemingly boundless free verse, Skoog’s work simultaneously disorients and delights, filtering the most vulnerable human experience through the amorphous, hallucinatory lens of the imagination. It
is Skoog’s particular imagination that allows us entrance into the quick-witted, quick-cutting lines of his meandering work. Just as his lines begin to take shape inside you, lead you towards one seeming thematic trail of discovery, Skoog’s syntax alarms, the intellect of his lineation swerves into new associations of the quasi-conscious mind. Skoog is very clearly awake, attune to his surroundings, their affect on him. But the stream of conscious lilt of his poetic voice transports his reader into the wonder of the unknown.

When defining free verse, William Carlos Williams said it is “the form of poetry related to the movements of the imagination revealed in words.” Skoog’s poems are saturated with definite images of the places he has lived—Kansas, Montana, Lousiana, California, Washington—of people he has known, his parents, his childhood. Casting these images with the vivid powers of his descriptive lexicon, he allows us entrance into the real. Yet once inside it, we see the contours are hazy. Skoog shows us the way memory and association distort, magnify, make fantastic the edged contours of our understanding. His poems carry us through the veering trails of what it means to perpetually rediscover oneself, teaching us to constantly resee the familiar.

Ed Skoog is the author of several books of poetry including Toolkit, Field Recording, Mister Skylight, and Rough Day. He has taught at the New Orleands Center for Creative Arts, Idyllwild Arts Foundation in Idyllwild, California, and Tulane University. 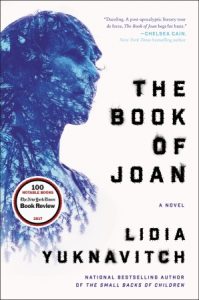 Lidia Yuknavitch | The Book of Joan

Nominated for the 2018 Ken Kesey Award in Fiction, Lidia Yukavitch’s newest novel The Book of Joan marries rich lyrical prose with the elements of a science-fiction thriller to create a post-apocalyptic world terrifyingly reminiscent of our own inevitable political and ecological future. From its start, The Book of Joan does not shy away from broaching the societal fate associated with dictatorial rashness or a cultural-collective lack of environmental awareness.

Yuknavitch seems to employ her affinity for and competitive background in swimming within her writing. “When pulled under, kick,” she says, of being a “very very good swimmer,” a motto readily apparent in her most recent novel. The Book of Joan fearlessly embodies Yuknavitch’s belief that art, perhaps not unlike swimming, is an act of resistance. Writing, Yuknavitch says, should “fight back against the oppressive scripts of socialization and good citizenship.” TheBook of Joan, at once bizarre and eerily familiar, casts open a world where kicking is vital, where lack of self-propulsion or individual will leads to cultural demise.

Yuknavitch’s narrators, a play between the third and first person perspectives of Christine and Joan, boldly penetrate and merge a girth of genre terrains. Saturated with alluring body, sexuality, violence, and nature imagery, The Book of Joan calls to mind the work of her contemporary Jeff VanderMeer, as well as her predecessors Ursula K. Le Guin and Angela Carter. Like VanderMeer, Le Guin, and Carter, Yuknavitch compels us to ask the most sensitive, uncomfortable, and fear-inspiring questions regarding our societal future, as well as the consequences of our past historical patterns.

Yuknavitch is the author of several books including the National Bestseller The Small Backs of Children, Dora: A Headcase, and her critically-acclaimed memoir The Chronology of Water. Her writing has also appeared in publications including, The Iowa Review, The Sun, and Another Chicago Magazine. Yuknavitch founded Corporeal Writing, a workshop series in Portland, Oregon where she currently teaches and resides.

Kari Davidson and Kathleen Levitt are MFA students of creative writing at Portland State University. They have edited for Portland Review since 2017.