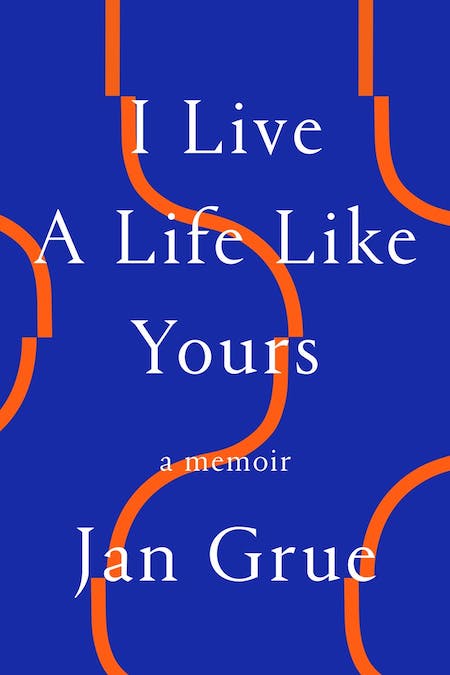 Grue approaches his memoir and his life indirectly. A short plot summary would say that Grue discusses his childhood and early adulthood, leading to his marriage and becoming a father. Those elements are here, but they almost seem beside the point, even though they are very much the point. Rather than presenting a linear narrative of his life—a fabrication most memoirs perpetuate—Grue circles around ideas and events, mentioning them, reflecting on them, then dropping them for pages, only to come back to them again and again throughout the book. The reader knows early on that he is married and a father, but we only see the scene of his son’s birth late in the book after we know enough about who he is and how he came to that point in his life. The same is true for the revelation of his misdiagnosis.

Grue barely mentions his diagnosis throughout much of the book, talking about how he functions in the world rather than explaining symptoms and side effects in detail. He does explain that, from the age of three, he had a progressive muscular disease that kept him from developing muscle and weight, leading to his being wheelchair-bound for most of each day, though he is able to walk very short distances. Most importantly, this early diagnosis is of a progressive, degenerative disorder that will lead to an early death. When he is a young adult, though, he receives a new diagnosis, one that does not necessarily predict degeneration or an early death.

He spends much of the first half of the book exploring the language surrounding how the world sees him and how he has worked to craft a language that allows him to define himself. He even says, “I began to write because I needed a different language than the one I was offered.” The world, especially the medical community, has not given him the words to describe who he is and who he wants to be; thus, he writes to carve out his own life and language, to create a space for himself in a world that doesn’t want to provide him with any place.

One of the ways he approaches this issue is by interacting with a variety of other texts. Grue is a professor of sociology and human geography at the University of Oslo, with his doctorate in linguistics, and it shows. He interacts with theoreticians and sociologists, such as Michel Foucault and Erving Goffman, using their analysis of observation, surveillance, the effect of the gaze, and those who are stigmatized to talk about his experiences, to shape his reflections on how the world sees him and treats him. He brings in writers, such as Borges, Camus, and Didion, to talk about choice and self-perception and grief.

He not only interacts with published authors, though; he also pulls from doctor’s notes, letters to and from Social Services, and emails to and from university housing offices to illustrate how others see and treat him. Instead of talking about the language solely on a theoretical level, he uses these examples to present the practical realities he has faced and continues to encounter. By weaving these texts throughout, Grue creates a story that interacts with other writing to help propel his ideas forward.

Similarly, he explores the idea of memory, both in terms of writing and how memory shapes our self-perception. We allow our memories of who we are, especially those shaped by other people, to define and limit us. Grue writes, “Memory plays tricks on us, never more so than when it teams up with our expectations. The past is not what happened then, it is what we are speaking about now.” However, unlike most memoirs that are about recreating a past, Grue’s work is about creating a self in the present by facing those memories and even, on some level, forgetting those memories. He reminds readers that we have to forget who we were in order to become someone else, that as long as we hold on to others’ and the past’s perceptions of us, we are unable to be different than who we once were. When he receives the news that he has been misdiagnosed, for example, he feels free, not merely because he realizes his supposed early death might not now happen, but because he can be someone different than who everyone, including himself on some level, thought he would be.

Grue talks about his travels throughout much of the book, as he studied abroad several times during his life, but those times lead him to explore the privilege he has enjoyed in his life. His family was both able and willing to push against the system to help him get what he needed to live the life they and he believed he should have, a privilege he knows many people don’t have. Even though he is in a wheelchair, he reflects on others who don’t have even the freedom he does to move through the world or those who lack the mental capacity he has. He writes, “I was not as aware of my social advantages back then—the fact that I enjoyed freedoms that others did not have, the freedom to believe that my dreams could come true.”

However, he also reminds readers that privilege is not enough to achieve what any of us are capable of, adding, “That did not mean, however, that I didn’t have to work for it,” going on talk about the hours of work he put into learning how to drive a vehicle reconstructed to fit him. He has the privilege of parents who acquire such a vehicle, but then he works to learn to use it. He has more privileges than some, but fewer privileges than others, as most of us do in this world. Grue wants readers to understand that, since we are in that position, we must work to make use of them to become the people we need to be.

The book is both about his disability and not about it at all. Like all good memoirs, it’s about himself and us at the same time. It’s about a world that doesn’t welcome him into it, a world that many of us help create, unfortunately. Grue doesn’t shy away from that idea, though he also never states it outright. It’s an implied critique of those readers who do have more privilege because they have abilities the world values and privileges.

More importantly, though, Grue is exploring how anybody shapes a self in this world. No matter who we are, some society around us will try to tell us who we are and who we should be. They will try to limit us in some ways and point us in other directions. When Grue is recovering from a broken ankle caused by a fall, he receives a fellowship for a project focused on disability. He writes, “Now it was a way back to the question I had posed to myself but never answered: Who am I in the world?” This book is part of his exploration of that question. This book asks readers to consider that question for themselves, as well. Near the end of his memoir, he writes, “With these words, with this book, I am creating a space in the world. If I succeed, I will be recreating a part of the world, my part, with this book, with these words.” He has succeeded in helping to recreate a part of the world for the reader, as well as for himself.

Kevin Brown is an English teacher and freelance writer. He has published three books of poetry: Liturgical Calendar: Poems (Wipf and Stock); A Lexicon of Lost Words (winner of the Violet Reed Haas Prize for Poetry, Snake Nation Press); and Exit Lines (Plain View Press). He also has a memoir, Another Way: Finding Faith, Then Finding It Again, and a book of scholarship, They Love to Tell the Stories: Five Contemporary Novelists Take on the Gospels. You can find out more about him and his work on Twitter at @kevinbrownwrite or at http://kevinbrownwrites.weebly.com/.