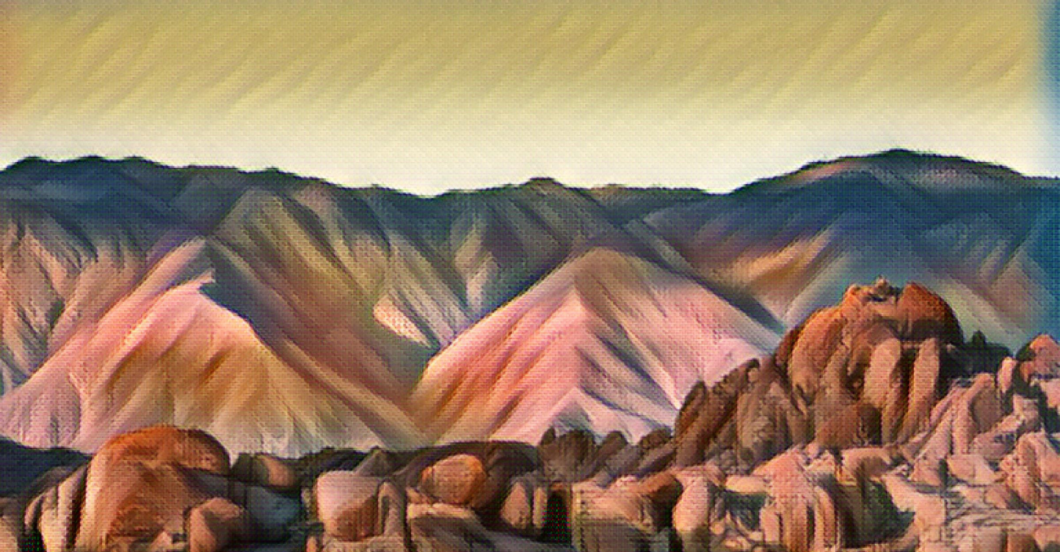 The door swings open slamming against the cement wall. Two guards stand at the opening. They do not cross the threshold; instead they peer in as if into the mouth of a cave. Perhaps they are revolted. It seems wise to be revolted by a cage. Come with us.

The smaller one carries a baton. He swings it casually; a batter up to plate—or as casually as one can swing a threat. His face appears bored; a face waiting for a bus. The larger one carries the chains. He holds them delicately—near lovingly—like they could be the bones of a beloved. He smiles. There is chocolate in his teeth.

Down the hall. The baton digs and prods as if entangled feet can shuffle faster. The baton grinds into bone.

Within these walls shame takes on new measurements; the younger men struggle with this and for it they are beaten, in a brutal baptism, until they learn that the most radical is the one who survives.

Up the stairwell. The steps are difficult for old knees. It is easy to become winded. Somehow the baton never tires. Prod. Dig. Herding cattle, they will joke. No, swine. Laugh. Laugh. They will laugh.

Up another flight to the third floor. Down the hall, towards the infirmary. Who is sick? They will not answer. Was someone beaten? Is it critical? The guards can only chuckle and prod.

Two nurses walk by hunched into their phones: monks into their dripping candles; pedestrians struggling against a mighty wind. The guards slow as they pass. The air has changed. They appraise the nurses up and down; cartoonish in their desire—yet they allow the young women to pass without molestation. Within these walls, cling to the small mercies. Continue down the hall. Push. Prod.

A door opens into a small room. There is a large window, the only window, giving view to the yellow rolling hills beyond these barbed walls. Last year those hills caught fire; they sent prisoners out with buckets. The view seems absurd, even gaudy—do not ask the imprisoned mind to put order to such vastness.

There are machines, monitors, the clear rubber tails of IV drips reaching for the dusty floor. In the middle of the room is a chair with leather straps. Sit, the guards command. They undo the bones of the beloved only to replace restraint with the leather straps. Two across the ankles; two across the forearms. The straps are thick, rough, dry. When pulled tight, they send particles into the air. They cut at the skin. At what age is the body no longer a weapon? What level of restraint will put a guard at ease?

Comfortable? the smaller one asks. Such a nice day, isn’t it. What a view! More laughter.

The larger one pulls up a chair, impeding the view. He straddles the chair, leans his forearms against its back. He resembles an actor set to deliver a final monologue. With the sun at his back, his face is obscured. A shadow. A mask. Is there still chocolate in his teeth?

I have orders from the top not to let you all starve this year, the guard says in his thick midwestern accent. They say the optics are bad; I say this is America and heck you should be able to do whatever you please. But I don’t make the rules, just get paid to enforce them. But don’t think I didn’t go to bat for you. I did. Honest. Went to the warden myself and tried to explain it’s your holy month and how it’s the same every year and as such you all know the rules: if you don’t eat at meal times, you’re at the mercy of whatever you can stuff into your pockets. I tried explaining the sundown laws or sundown meals or whatever it’s called but she wasn’t having it.

You heard right. The new warden’s a lady! Who says things aren’t changing? Who says we’re not open-minded? But you know what she says to me? She says, Every brotha who gets behind these walls suddenly thinks he’s Malcolm Freaking X.

You gotta admit that’s kinda funny! And—kinda true. Her point being: we’re not going to keep showing religious favoritism, allowing you all to sneak your pocket bread or whatever, since it is technically against the rules to have anything besides air in those pockets—honestly the uniforms shouldn’t have pockets in the first place—idle hands and temptation and what not. I’ll remember to bring that up in my check-in tomorrow. Maybe next fiscal year we’ll order new uniforms. How about that? Let me write that down. Anyways, the new warden’s all about equality and you have to respect that.

This is all to say: my hands are tied. Okay. And since you and the other members of the Nation didn’t eat this morning, not even a nibble of turkey bacon, which I know you guys love and we did put on special order for you, the warden ordered all of you in for an afternoon snack.

Now we brought you in first because the younger ones respect you, they’ll listen to you. A veteran who went through the ringer and came out reasonable. So be reasonable with us. Let us help you. Trust me, we take no pleasure in seeing you strapped up like this.

See that camera up there? The warden’s watching us right now as we speak and if you don’t eat it’s my behind—and hey I like my behind! The missus does too, if you know what I’m saying. So let’s just eat something yeah? Come on, you gotta be hungry. Been what, over a week since you’ve had a square meal? Me? By joe, I can’t go more than a few hours! I don’t know how you people do it.

Listen. Hey. Listen, before you say anything. Hold on. Hear me out.

Earlier, on my lunch break, I went into town to run some errands for the missus. On a whim I up and stopped in at that diner, you know the one on the corner of … oh sorry that’s right, never-mind. Anyways I stopped in at a diner and out of the goodness of my heart (and pocket) picked up one of them World-Famous Banana Cream Pies. And you, you lucky son-of-a-gun, get the first slice. I got a fork right here in my back-pocket. A plastic one of course. I’ll undo these straps so you can enjoy your slice. But only if you mind yourself. How’s that sound?

Hey! I’m talking to you—

—No? What do you mean no? It’s freaking pie! Come on now. I thought we were being reasonable here, friend. I thought we had an understanding. My behind, remember?

You’re not gonna eat? Really? Okay then. You sure about that? Last chance now.

Listen if you’re gonna be childish, I’m gonna have to treat you like a child.

Okay then you big baby. Open up there. Open up now. Here comes the uh choo-choo train. Chugga-chugga choo-choo! No? How about an airplane? Your Arab buddies love flying those. It’s taking off, it’s soaring, oh no engine trouble, nose dive, we’re gonna have to land, we gotta land, open your mouth! We gotta land!

Seriously!? Well. Let’s see if we can get in there with a little old-fashioned elbow grease. Come on. Open up. Open that mouth! Come on … almost … there … fuck! Damn near bit me, you see that? He almost bit me! Shit! I mean shoot. Excuse my French. The missus hates when I curse. I tell her I work in the belly of the beast, what does she expect? But she, god bless her, doesn’t care. Says my tongue should remain with Christ no matter what. She’s a good one; keeps me honest. Fart! That’s what I’m allowed to say. Fart fart fart. Doesn’t roll off the tongue as nice but we all make sacrifices. Happy wife, happy life.

But you. You’re not making anything happy. Look at you. Cream and pie all over that fancy beard of yours. You look foolish. Childish if you ask me. You got any children? Probably a bunch huh? Multiple mothers, I’ve seen the statistics. Well I got two at home and I don’t need one more. Twins. Life’s crazy! But we’re blessed.

Well. Thought this might happen. On to plan B. Pardon us while we strap your neck back there. Can’t have you squirming for this next bit.

The larger man walks over to the sink to wash his hands. The smaller one snaps on latex gloves and wheels over a large box with a thin rubber tube sticking out of it.

No it’s too late for all that, the smaller one says, turning on the machine. Stop apologizing. Enough! You should’ve listened. You should’ve taken a bite of pie! But now we’re here. Plan B. You brought this on yourself, refusing to eat like a civilized human.

So this is how it’s gonna work. You see this here gizmo? This is a feeding tube and its gonna go up your nose and down your throat but you can’t squirm or it’ll go down the wrong tube and into your lungs and we don’t want that cause then it’s paperwork—it’s gonna go down your throat to your stomach and you’re gonna start choking and probably vomiting and making a real mess of things—a mess I’m going to have to clean up because you decided to act like a donkey! Ornery is what we would call you back home.

Speaking of back home, you know we have a saying: what’s a birthday cake to a goat? Guess who’s the goat in this here situation … well here comes the tube. Bon Appétit!

Scream, plead, fight. Hands claw face. Cover mouth. Air needed is denied. Eyes tear beg sob. A fire rages down and through a bleeding throat. The pain becomes a cell. The pain becomes a white consuming flame; immolation of the throat; white as a hospital, white as hate, white as the clouds beyond yellow rolling hills. 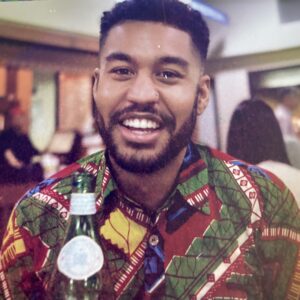 Matan Gold (he, him, siya) is Black & Filipinx writer from the San Fernando Valley. His essay 'We Real Cool' was selected for the 2020 Best American Essays 'Notable List'. He wore a blue FUBU jersey in his 8th grade yearbook photo. www.matangold.com