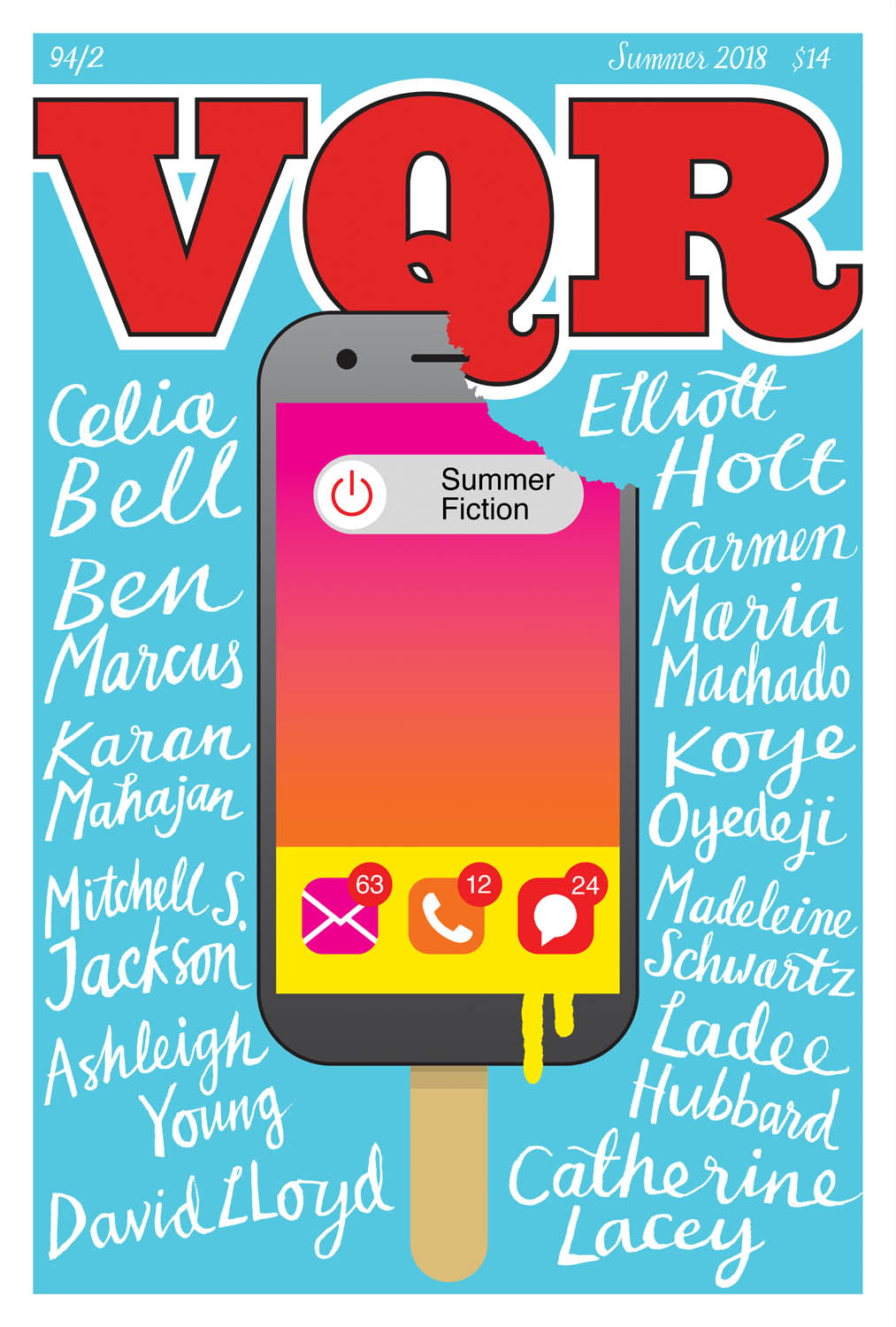 There are many ways to tear a person apart, and the stories and poems within Virginia Quarterly Review’s Summer 2018 issue prod and poke at the external and internal causes. From Hannah Louise Poston’s nonfiction about a scandal in the beauty community to Kaveh Akbar’s poems that feed the unknown, the writers in this issue of VQR capture the unrest in our current American climate. Part of the appeal of reading this summer issue is locating the source of the stories’ discomfort.

In Ben Marcus’s short story “The Boys,” a family is grieving after the family matriarch dies. The widower, Drew, and the two boys left behind soon form an uneasy relationship with the matriarch’s sister, a woman who is away from her own family to take care of Drew and his sons. Soon, the sister is an integral part of the family, becoming closer to Drew and the boys than she ever imagined she could. Written from the sister’s first-person point of view, Marcus is able to navigate the familial relationships, the long stretches of awkwardness, and encouraged by equal parts grief and alcohol, the sister’s relationship with Drew moves past sibling-in-law affection and into an uncomfortable intimacy. Though Marcus never lays bare the protagonist’s mind, he lets the reader follow the thread of her emotional journey, and it’s through that ever-twisting string of emotions that Marcus gets us to lean close, to inspect the psychology of a woman who bluntly says her own sister’s death: “I had just been so bored, and now someone had died and I was needed and maybe we’d all be knocked out of our habits into a better world.” Marcus makes his subject an object of dissonance, a disruption for both families, as she struggles to articulate the choices she makes. This interior, internal look at dissonance lets us squirm, forces us to relate to the person who disturbs harmony, the poltergeist who can’t leave enough alone.

Also struggling is the narrator in Ashleigh Young’s short story “She Can’t Work,” an unnamed young woman who can’t work on her art while her partner is around. Unlike Marcus’s story about a disruptor, Young writes about those being disrupted. This unnerving narrative stays so close to the protagonist the reader feels the claustrophobia when her partner peers at her and hovers around her and her work. Their relationship simmers with a sense of entitlement; whenever the man is around, Young writes, the world reorients itself around him. Even when the protagonist tries to talk with her partner about what she accomplished, she feels herself losing what was hers because it is becoming theirs. While Young avoids the characteristics of the classic Gothic narrative, she does indulge in Gothic imagery, chiefly the image of a damsel in distress trapped by a man’s leer and his authority. This dark imagery heightens the dissonance in “She Can’t Work,” casting a shadow, like a constant scrutiny, over the narrative. This scrutiny only adds to the protagonist’s powerlessness in the relationship, creating a narrator more attentive to a man and his habits than to herself or her own work.

Carmen Maria Machado’s short fiction “Mary When You Follow Her” focuses on the titular Mary, a teenage Latina who dodges sexual harassment as well as an evil presence snatching up young girls. The story is a single, thousand-word sentence, which gives the piece a restless, rambling energy. This energy propels the narrative as Machado sidesteps the traditional coming-of-age motifs, to focus on her protagonist’s battles with patriarchal forces that are personal, systemic, and sinister. Maria’s growth elevates the conflict to David-versus-Goliath proportions, as Maria squirms under multiple gazes and encroaching dangers. The restlessness of the narrative underscores Maria’s own desire to break free, to escape the dissonance and danger the world is creating around her body: “slipping her Walkman’s headphones over her ears even though… music would conceal an attacker’s approaching footsteps… [her] ponytail was little more than a handle for rapists.” The story’s restless, constant ramble is at odds with the pressure Mary feels to be right, to do right, to constantly conform. Machado perfectly captures the voice of a girl pushing back against threatening forces, and just like the other pieces in VQR’s Summer 2018 issue, this story points to innocence disturbed and agency disrupted.

Ross Showalter is a BFA in creative writing student at Portland State University. His work has been published in Hematopoiesis Press. You can find him on Twitter @thisross.