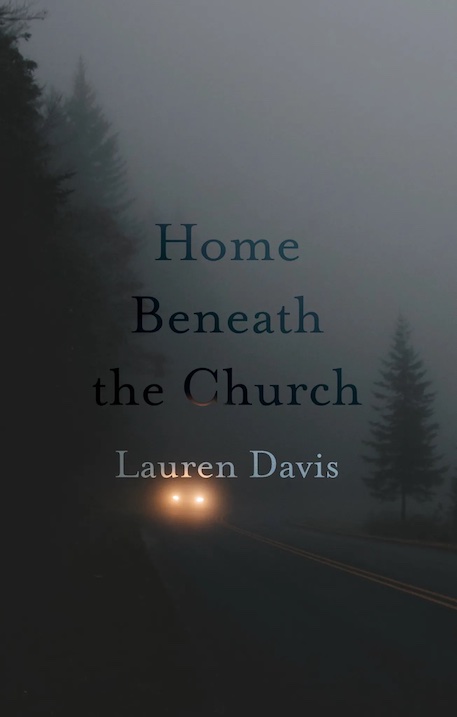 When communing with Lauren Davis’s debut poetry collection, two words primarily come to mind: “embodiment” and “intimacy.” While these are common enough terms to describe the experience of reading a good poem, the stakes are much higher in Home Beneath the Church. In this slim collection of forty-nine poems, Davis takes us on a wide-ranging journey within the realms of her marriage and the natural world. Throughout the book, her preoccupations with staying grounded in a physical reality manage simultaneously to elevate them to a deeper spiritual plane.

Along these lines, the other most relevant word in considering these poems is an ongoing hope for “rootedness”—a sense of belonging despite never being quite fully at home. The concluding couplet from her poem, “Home,” for example, conveys this paradox well: “Yes, my love, we belong, but on soil-stained knees, / asking for each wild thing’s consent to stand.” However, Davis writes not merely from a quasi-pantheistic stance of worship toward nature. Instead, critical poems in the middle of the collection—among others—evoke a Catholic sensibility that signals to the reader that we are inhabiting a particular kind of spiritual space. Saint Sara becomes a significant figure, who makes a new way of life possible for the speaker; holy women inhabit this collection in a way that is not quite “devotional” in the traditional sense, so much as experiential—we encounter these women as they appear in our daily lived realities. In this respect, Davis’s sacramental imagination also allows for a catholic (lowercase) view of everything she encounters. Seen with her sensitive eye, everything in the natural world has a capacity for grace—from a candle flame to fresh berries off the bush. Reflecting on a lover’s Madonna tattoo, she asks him to recall “how you decided / she must be a permanent stain on your skin.” In a certain sense, this image speaks for so many of the themes throughout this work: the ways that the sacred can leave permanent marks on us, and how we are inevitably forced to confront the realities of the bodies we inhabit.

That truth is most literally explored in the first section of Home Beneath the Church. In these earlier poems, Davis invites the reader into her most vulnerable experiences as she struggles with a reality shared by many women: vaginismus. By situating us within such intimate circumstances, she makes it clear from the beginning that our bodies both make simple daily acts possible, (or impossible) and can serve as vessels for experiencing the divine. The discomfort of discussing this topic places readers in a uniquely empathetic stance that enables us to explore the collection’s later poems with a more keenly attuned perspective. This organization seems deliberate, as the early focus on such an individual, alienating experience helps guide readers to expand our view into the larger world around us with a similar sense of vulnerability. To maintain that stance in the later poems, Davis continually applies language of openness and other delicate hints of sensuality and sexuality in a variety of scenarios—encouraging readers to reflect on the ways that our particular bodies help us fully inhabit our days.

Since Davis’s work seems so committed to particularity, it is also worth mentioning that she lives in the Pacific Northwest: a region famous for its natural wonders and mysterious moods. As a poet of place, Davis evokes the experience of dwelling in such spaces in a way that feels fresh, yet familiar. While some images in the poems could occasionally run the risk of feeling too well-worn—it is hard to resist the temptation of a bird image in a nature poem, for instance, though these are often done to good effect—she balances such examples with other, more haunting scenes. Some of my favorite lines include “and surely the blood / washed deep into the mud” and “Clouds empty their bones.” One particularly memorable poem, “In the Forest by the Bay,” recounts a visit to the Afterglow Vista, otherwise known as the McMillin Memorial Mausoleum in Washington. As Davis reflects upon the monument of human ashes that remain encapsulated in this otherwise wild nature setting, the scene becomes an opportunity to consider a question that in some ways sums up the book’s overall themes: “Is this why you revere all things, just in case?”

The poems in Home Beneath the Church are largely written in free verse, which suits the organic nature of her content. The two most overtly formal poems are both loosely constructed villanelles, which makes them stand out a bit more than they might have in a more eclectically formal collection. Her most common formal technique is to employ free verse couplets that allow the reader to consider each moment on its own terms while being propelled onward to the next line. Throughout the collection, Davis’s language is profoundly sacramental, seeking to name the spiritual within the physical world, while embracing the limits of our human efforts to contain either realm. That said, they remain accessible to readers from all perspectives (religious or otherwise) because Davis’s primary goal is to inhabit a space with reverence and authenticity. As can often happen in particularly striking poems, they make us aware of the things we cannot say even as we meditate on the poet’s attempts to say them. In the process, the poet invites us to share this intimate space, recognizing how much remains a mystery. I’m grateful to have had the chance to experience the world through Davis’s eyes in this stunning new collection. It is a joy to encounter a poet unafraid to see the limits of her own humanity with a capacity for grace. In a time when human connection sometimes feels ever-more-tenuous, Davis lets us in. 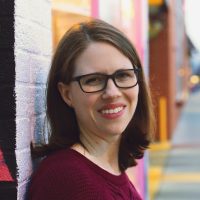 Casie Dodd lives in Arkansas with her husband and two children. Her writing has appeared in Fare Forward, Susurrus, Front Porch Republic, and other journals. She is the Founder and Editor of Belle Point Press, a new small press celebrating the literary culture of the American Mid-South.