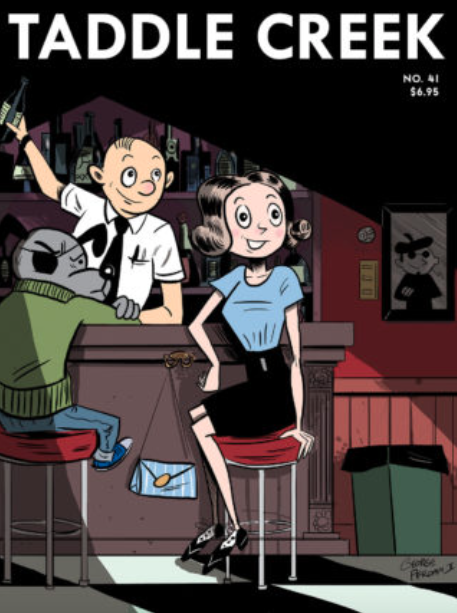 Taddle Creek is a semiannual Toronto, Canada-based literary magazine that proudly proclaims itself as “an odd mix, to be sure, which is why Taddle Creek refers to itself somewhat oddly as a ‘general-interest literary magazine.’” This description could not be more accurate. The magazine’s Summer, 2018 issue reveals a hodgepodge of content, including fiction, poetry, cooking recipes, comics, and historically-educating essays. The raw humor throughout the summer issue is reminiscent of the semi-snarky tone of the 1960’s Underground comix era, comix being a term invented to define a comic that is independently made, intended for mature audiences, and often unashamedly revealing.

Taddle Creek makes a point of emphasizing not only their desire to be viewed as a magazine on the fringes, but also as a professional magazine with an eye for quality. Within most issues are four to five features alongside two to three comixs, one or two pieces of art, three to four pieces of fiction and two to three poems. At the front of the magazine sits the Ephemera section, a sort of free space for the editors, and within this space the editors mention awards, important announcements, humorous reader responses, and tongue-in-cheek editorial corrections. Above all, this introduction to the magazine primes the reader for the eclectic content within.

“Can You Tell Me a Joke About Your Profession,” a Summer, 2018 short story by Shannon Webb-Campbell, unabashedly bares its protagonist’s flaws to the reader. Rachel is a 30-year-old, over-analytical, obsessive copy editor. She is introduced as someone who keeps track of everything she does, including how much she eats, sleeps, and masturbates, and Campbell’s writing successfully puts the reader in the same headspace:

Right outside the gallery hung an obnoxious, all-capitalized sign: “CAN YOU TELL ME A JOKE ABOUT YOUR PROFESSION?” Nothing annoyed Rachel more than caps lock. People used it to command attention, for emphasis, but no one liked being yelled at. It enraged her.

Eventually, Rachel comes in contact with someone who gives her the opportunity to be analyzed in a very different and beautiful way. Not so in “The Same Cabin” by Cedar Bowers. In this story, the reader is led to the same existential crisis as the unnamed protagonist, a woman who sneaks away from her family for the weekend in an attempt to find herself. She has been cooped up with her kids for almost a year while her husband travels, and our protagonist’s only solace in life is her daydreams of vacationing away to the same Airbnb cabin that her successful friend, Sonia, once visited. However, once the protagonist gets to the cabin, she loses herself while trying to find herself.

It is stories like these, which emphasize raw and flawed realities, that Taddle Creek is all about. Readers cannot help but empathize with Bower’s protagonist, who anguishes from not living up to their successful friend, who believes she only needs this one vacation to find herself again. What follows is a sobering deconstruction of the unrealistic nature of this belief, a shattering of perspective that pulls Sonia off of the high pedestal the protagonist has placed her friend on.

However, not all the pieces within Taddle Creek are as deeply existential. “Girls Washroom” by David Lapp, for example, is a comic about one young boy’s experience of sneaking into a girls’ bathroom with his friends. In twelve panels, Lapp is able to convey an entire story quite effectively through his firm grasp of action-to-action and subject-to-subject transitioning. Lapp also uses a Lynda Barry-style of storytelling, which consists of a running reflective narration that comes off like a confession. Through this narration, Lapp executes that same unabashed nature evident throughout Taddle Creek‘s Summer, 2018 issue.

Gary Hall is a reader for Portland Review.