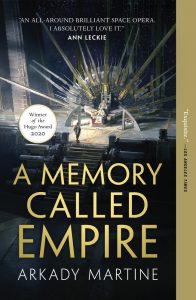 In Arkady Martine’s A Memory Called Empire (2019), Mahit, a young ambassador from an insignificant space station, arrives at the city of Teixcalaan, the very centre of a rapacious space empire. She must carefully navigate the political minefield she inherited from a capricious predecessor who not only died under mysterious circumstances in a foreign land, but in doing sodeprived Mahit of access to his precious memory bank, without which she is effectively hobbled from the get-go. It is a classic piece of shenanigans in space—one of my greatest joys—but the real revelation of this book is Mahit’s emotional engagement with the empire she has been tasked to keep at a safe distance from the tiny space station she calls home.

“Colonialism in space” is neither new nor rare in science fiction, but my hearty recommendations of this book over the past year were sparked by the fact that Martine displays a rare understanding of an often-overlooked yet immensely important facet of colonialism: the aspiration to belong that it engenders in the bosoms of those it deems the out group. Martine introduces us to Mahit as a person who has immersed herself in the culture of Teixcalaan to a point of remarkable fluency, enough to be regarded with suspicion by her own compatriots, yet finds herself addressed without much finesse as a “barbarian” by virtue of the fact that she was not born Teixcalaani. This insurmountable exclusion is reinforced repeatedly, in contexts informal and official where her fluency is explicitly acknowledged yet dismissed. It’s a feeling familiar to any resident of an erstwhile colony right here on Earth who has been obliged to prove their fluency in the colonizer’s tongue, their accents mocked or subject to the kind of admiration one normally reserves for the cleverest chimpanzee in the lab.

It is impossible for me to engage with the politics of these books without acknowledging my own standing as the child of a former colony. Language was the greatest tool of the British Empire; they used it to introduce their values, assert their superiority, create a parallel caste system, and grease the wheels of their administration. They crafted their policies in Scotland and Ireland and Wales before importing them to India and perfecting them. To witness Mahit’s helpless love of this other culture through her engagement with its language, even as she understands its corrupting power and ultimately exclusionary nature, is to see myself represented on stage.

Noah Berlatsky, writing in The Atlantic, speaks to science fiction’s engagement with colonialism over the years as a species of anti-colonial discourse in which white people imagined other white people as victims of the kind of imperialist violence they themselves unleashed. Perhaps that is why so much of colonialism-themed science fiction fails to see the seductive power of the colonizer or address the complex windows of opportunity within systems of oppression that black and brown people have historically exploited to their advantage. In A Memory Called Empire, however, Mahit’s desire to experience the culture she has studied her entire life—and her subsequent realization that she will never be fully accepted by the Teixcalaani—consumes her to the point where she is lost in a maze within her own mind. Throughout the novel, Mahit is engaged in a series of conversations with herself, her people, the voice of her predecessor who is the manifestation of a version of herself that surrendered to its love of Teixcalaan, and Teixcalaan itself. No attempt is made to simplify the choices in front of her: the Teixcalaan of her golden imagination and the complex realities she encounters in person; the space station that will always be her home yet which grows more foreign as she understands more of it. 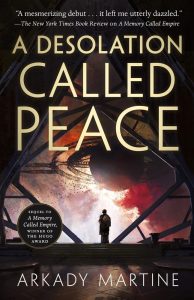 In its sequel, A Desolation Called Peace (2021), the action moves to the frontier of the Teixcalaani empire, as events engineered to some degree by Mahit herself move swiftly toward what promises to be an endless war of attrition and devastating loss. The pulse of this novel marks a change from the previous one. The first took its time to unfold through the scrupulously surveilled streets of supremely civilized Teixcalaan, accompanying Mahit in her stumbling, blind walk through the echelons of power and seamy pockets of resistance, through palaces and revolutions with her thoughts beating in tempo with the convoluted shouts and murmurs of an empire seething under its carefully pruned exterior, whereas the second book takes off like a rocket from the start. The vibe is very much Star Trek meets Ender’s Game in this tale of clashing space generals, palace intrigues, deadly alien civilizations, and two women exploring what must surely be an impossible romance against the backdrop of a war that is likely to wipe everything from its path. And yet, Martine once again finds the space to challenge the reader’s understanding of this world and thence, their own world—wherever it might be, whatever shape it might take.

Building upon the themes of identity, belonging, and memory that wove their way through the first book, the second delves deeper. It begins with an opaque monologue on personhood and language that should strike an immediate chord with fans of Star Trek, particularly those devoted to The Next Generation, and then moves on to ask increasingly pointed questions of its characters about love and tribalism and the greater good. It brings up questions of what we choose to remember, what we might have forgotten, and how it affects our actions in the present day. It examines the price of love and who has paid it and why. Characters must confront their ideas of what and who constitutes a person and thus examine their standing in the collective.

Through the events of the first book, Mahit was forced to become an individual who is extraordinary and unique; unable to become the person her culture meant her to be and summarily dismissed by the Teixcalaani at first glance, she must become something new and unprecedented. Her search for her predecessor’s memory bank—the physical manifestation of her space station’s commitment to institutional memory—reflects the search of the colonized body for the memory of who they were before colonization. The painful process of reprogramming one’s brain to understand that permanent loss is a literal event for Mahit.

In the second book, the narrative expands to embrace the entire cast and three separate civilizations who must confront their identities when forced into contact with the unknown and the unexpected, facing morally repugnant choices sparked by hitherto undreamt scenarios. Here, memory is neither linear nor individualistic—it is instead tied to the collective experience of a group: fighter pilots psychically knit together by technology, a space station dependent upon the guidance of long dead voices, an empire that feeds upon its glorious past, and aliens who have forgotten what it means to be a sole entity. Language becomes the conduit through which we explore the world; it is not merely a means of communication but reflective of the different fundamental ideologies that drive these civilizations. And while at first, the difference in language is used to differentiate between the two enemy empires to stark effect, eventually we become aware of their similarities. What once appeared to be opposing ideologies are gradually revealed to be the two faces of a mirror, leaving the reader to ruminate on the relief of the resolution in juxtaposition with its emptiness. We hold it to be wonderful when we say we are all the same, but what if what unites us is a yawning hollowness?

There is plenty of action here: edge-of-the-seat stuff that stuns in its cruelty and stings with loss. There are laser beams and deadly fungi and the unpredictable use of technology. The war claims lives and readers are thrown into close contact with the living in their last, terrified moments before they turn into detritus. Everyone is doing in this book, a luxury afforded them by the thinking they did in the previous book. Ultimately, however, both A Memory Called Empire and A Desolation Called Peace remain most interested in the theme of colonization and its emotional weight. The seductive pull of its promises, the devastation of its rejection, the resentment of its power, the fear and excitement of engaging with it, and the hunger that drives it. I loved this duology. 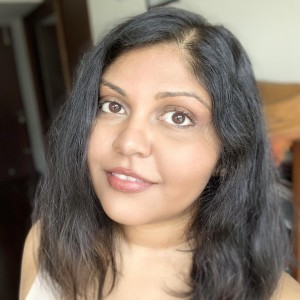 Amrita Rajan is a writer and reviewer. You can follow her various interests at Amrita By The Book on YouTube.