The year my father set adrift, the levee burst, my family’s
belongings blew out all the windows and doors— making
clear who held the foundation, close-fisted and sturdy— and
nobody cared to clear up the debris, least of all my mother;

who, instead, called forth the buzzards to graze on the
heirlooms, leaving me to imagine a past wherein the birds
had come twice— once to pick the flesh from the elephant
and again to collect all that the poachers had skimmed off—

and not a present, thereafter, where my mother placed two
mice in my palm— cold, smooth, white as bone, as if they
carved all the wild out, all the thunder and the howl— and
appointed me their guardian, saying, we couldn’t sell them,
not these;

that is to say, the ghosts were ours to keep, so I imagined that
when set atop rosewood shelves they’d rattle and shake the
glassware and china plates or, instead, scratch at the
cupboard doors and plead with hinges.

In Mo-Bay, where, in memory,
the home is preceded by two leafy green obelisks,
between which her grandmother has painted
the inner petals of the hibiscus pink, still allowing the ends
to be all sunset and tangerine, to call forth the hummingbirds,
who, in search of sweetness,
find only a child with hands too small to catch
the mangoes falling.

Still, she carries mangoes, bruised and busted,
up the stairs, every Saturday morning,
to the veranda where her grandmother plucks
black pearl seeds from yellow flesh,
and, rolling each bit of fruit between her fingers once,
uses all the wisdom of her wrinkled palms
to remove the ackee’s poison, or so the child thought.

Ackee whose poison, her grandmother told her,
had once raked her body across the tile floor
and left her face beaded with sea water,
a sweat, she said, colder than
the ocean at dawn and as old as,
if not older than, the furniture upon which
they sat, the house, or, the trees
which, every Saturday, rained sweet fruit,
June plums, soursops, mangoes.

Two figures take refuge on a bed of stacked pallets, set in the shade of tin roofs as the blue mahoe’s thick leaves climb up higher, dabbing hibiscus petals, higher still, a hillside rich in callaloo green, a country with the promise of Eden. Hurricanes are coming. There is grief in that— clouds steeping the sky earl grey— knowing you will have to leave. Reaffirm all of it, even the chimes that signal the storm, the wind circling, cracking the sugar cane, mowing down the homes.

Two women wearing dove white sandals and poodle skirts peppered with blue-red patterns hang chalky bulbs from their ears and strangle their waists with cherry belts. Fire hoses will turn on them soon. For now, linger there, on the children with no shoes, —durable— the arches of their feet and their peter pan collars. You marvel at a poster of a banana split, how its text is just as true as the “Whites Only” sign. Reaffirm all of it, even the fountain choking, the sound of struggle, gurgling down water.

Two men are carrying his body, dissolving into scorched light, —defiant color— unyielding to the darkness or his body’s forgiving blue. Painted with shaky resolve, a few years after the country is born again. Linger there, on his body limp and child shrouded. There is grief in that; how the unruly yellows and greens of independence only touch this scene in memory. Reaffirm all of it, even the rope that isn’t pictured, the absence of sound —heavy— the palm trees that hover in heavenly gold.

Ellison said reaffirm all of it, the whole unhappy territory, for it is all part of me. 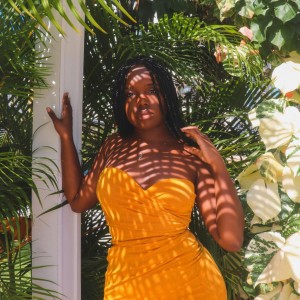 Nyla Jennings is a full-time student at American University. As the daughter of two Jamaican immigrants, her heritage has influenced her work. Find her at @nyla_jennings.