The central object of Samanta Schweblin’s latest novel, Little Eyes, is the kentuki, a smart-speaker-cum-Furby available in a variety of adorable skins. From pandas and moles to crows and dragons, customers can purchase their own personal smart pet, a device capable of moving around and responding to their every interaction. But owning a device, what Schweblin calls being “keeper,” is only half of the kentuki experience. The other option is to be a “dweller,” to purchase a code that allows you to connect with a random kentuki through your computer, giving you full control of the device, including access to the gadget’s camera and microphone.

The keeper has no control over who dwells in their device, and the dweller has no say in where they are stationed, which means Little Eyes is comprised of a myriad of stories from around the world. For kentukis are a globalised force, offering a leveled field where people can retreat from the unevenness and injustice of reality, the blind chance of the dweller relationship subverting the loaded die of class, race, geography and gender. Children in war-torn Sierra Leone can attend concerts in Hong Kong, swelling music blocking out the bombs and gunfire. People in the Caribbean can experience snow. Retired mothers in South America can live with promiscuous young women, vigilant against the shady actions of their new partners.

But just as some users find companionship or relief from their difficult reality, others have far more sinister experiences. Because, like most tech developments, the kentuki technology is only virtuous in a superficial sense. It might be marketed as enabling and rewarding, but is neutral or worse, as open to misuse and exploitation as any positive application. For example, the opening vignette finds three girls in South Bend blackmailed by their dweller, the kentuki having gathered intimate and compromising footage of their families, communicating its threat through a Ouija board. Others experience a more chaotic evil, like the mother in Vancouver who charges a kentuki for her daughters only to see it attack them upon activation. Or the dweller who finds their device dropped into a mass of battery farmed chicks as they peck themselves to death.

Schweblin uses the conflict between the cutesy covering of the kentuki and the nasty actions of which they are capable as an allegory for real-world technologies, speaking to the way such invasions of privacy are packaged as benevolent additions to our lives. The fur and feathers are just another version of the friendly tones that emerge from our smart speakers. Dressings that obscure the true purpose of the device, taking advantage of both our cognitive dissonance (how could something so cute/friendly exploit me?) and our habit of projecting imagined personalities onto the blandest of things.

Enzo, an Italian father in Little Eyes, falls into such a trap. Buying a mole kentuki on the advice of his ex-wife and son’s psychologist, he is at first wary of the toy, though finds himself bonding with it. His situation is difficult, his son splitting his time between Enzo’s home and that of his mother, and in his isolated position Enzo begins to project his own loneliness onto the kentuki’s dweller. They might be kindred spirits, goes Enzo’s logic, two lonely men looking for understanding. His wife, on the other hand, has read that dwellers are often pedophiles, and does a U-turn on having it around her son. Enzo pretends to comply but continues his attempts at communication, holding up his phone number to the mole’s camera. Soon the house phone will not stop ringing, a heavy breathing man on the other end asking to see more of the boy.

There’s a subtle absurdity to the various narratives, an ironic playfulness that allows Schweblin to craft predictably calamitous scenarios with a humorous air. But for all of its invention, the concept of Little Eyes feels strangely ordinary. The kentuki is less a near-future advancement than a nostalgically primitive throwback, a not-so-smart speaker dressed like a Furby whose biggest novelty is its transparency, its open acknowledgment that someone is watching on the other end.

Because someone is watching with our real-world devices. Writing for The Intercept, Sam Biddle described how a Ukrainian R&D team were given “virtually unfettered access to a folder on Amazon’s S3 cloud storage service that contained every video created by every Ring camera around the world.” Their task was to tag objects in the home security images to improve the recognition algorithm, a process that included both exterior and interior cameras. “The source said that Ring employees at times showed each other videos they were annotating,” Biddle writes, “and described some of the things they had witnessed, including people kissing, firing guns, and stealing.” A real life kentuki, and one with more eyes and ears that anything Schweblin imagines.

It’s not just Ring. In the spring of 2019, Bloomberg reported that a global team of Amazon staff have access to the audio recordings of Echo/Alexa devices, transcribing conversations between the speakers and their owners to help facilitate the AI development. Later that year, Amazon admitted that it saves transcripts of such user interactions, even after the customer had deleted the audio recordings. Of course, Amazon insists, the Echo speaker only records when activated, but reports state that the device is prone to accidental activation, or even activating with no obvious prompt at all. Alexa is listening, and it is increasingly difficult to tell exactly when, for how long, and who else might be, too.

Even Amazon employees agree. Software engineer Max Eliaser said Ring should be “shut down immediately,” because “the privacy issues are not fixable with regulation and there is no balance that can be struck.” As he continued, “the deployment of connected home security cameras that allow footage to be queried centrally are simply not compatible with a free society.” But then, as Shoshana Zuboff put it in Surveillance Capitalism, asking giant tech firms to protect privacy is “like asking Henry Ford to make each Model T by hand or asking a giraffe to shorten its neck.”

Schweblin’s narrative is not so much an exaggerated dystopia a la Black Mirror, but rather a refocusing of the present. The one-on-one relationship between keeper and dweller distills our eroded privacy into something easier to understand. The omnipresent eye of data harvesting whittled down to the perverse (and almost retro) immediacy of voyeurism. As one character puts it, “having a kentuki running around was the same as handing a stranger the keys to your house.”

Little Eyes also confronts the repositioning of responsibility within such systems. In one scene, a character visits a supermarket to find the cashier with his kentuki on the counter, “moving over the invoices and receipts.” The protagonist Emilia is unimpressed. “She didn’t think it was smart to give it so much freedom around people’s financial information,” Schweblin writes, “and Emilia was starting to suspect that, if there were abuses by some kentukis, it was only because of their keepers’ negligence.” The passage elucidates a mode of thinking related to invasive tech and surveillance, where any negative consequence is taken not as a failing of the devices and their operators, but rather the person who interacts with it. If such technology invades your privacy, then it is your fault for not taking the requisite action to prevent it. Or for even requiring privacy in the first place.

So why does the kentuki, like the products of Google and Amazon, become a desired object across the world? Why sign yourself away to that sort of invasion of privacy? One reason, Schweblin posits, is the assumption that novelty equates to significance. “I may be crazy but at least I’m modern,” Emilia thinks to herself, as though there is some moral value or purpose in standing on the bleeding edge of technological development. In a capitalist system that relies upon the constant development of new products, the abstract notions of “progress” and “modernity” are elevated to noble quests, no matter how banal or unhealthy their direction. Newness becomes its own measure of value and importance. “They weren’t pretty,” one character understands, “but even so there was something sophisticated about them that she still couldn’t put her finger on.”

This idea perpetuates itself even as we come to understand the true purpose of such devices. His kentuki stuck in a Scandinavian shop window, Marvin yearns for freedom, yet never once considers disconnecting from his device. Instead, he spends the remaining money left in the bank account of his late mother in order to modify and improve his kentuki. A new battery so that he might move further, new wheels to traverse rougher terrain. “Marvin knew that freedom in the kentuki world wasn’t the same as in the real world,” Schweblin writes. “And he also had to remind himself that he had longed for his own freedom without once thinking of disconnecting.” Marvin does not wish for some overhaul of the system, or a clean break from its ligatures, but rather a slight alteration of his own position within it. A change instigated not through protest or action, but the spending of money. In order to alleviate the pressures of capitalism, one dives deeper into it. 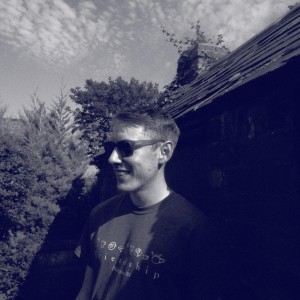 Jon Doyle's writing has appeared in The Rumpus, Hobart, Barren Magazine, 3:AM Magazine, Full Stop, and other places. He is represented by Akin Akinwumi at Willenfield Literary Agency, and you can find him @Jon_Doyle on Twitter or on his website.